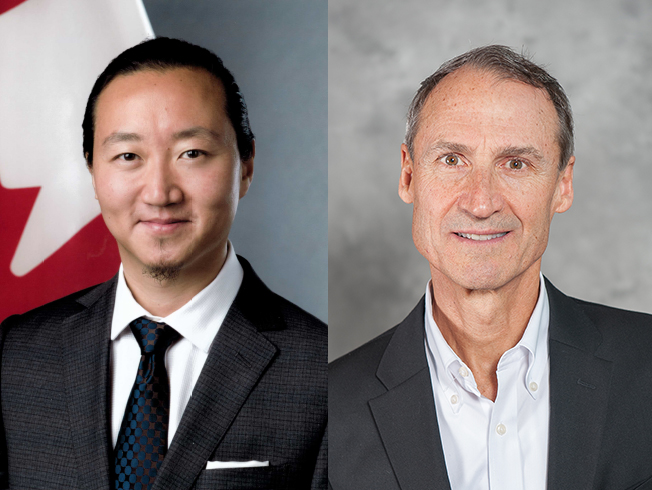 Join us for a conversation with Canadian Consul General Brandon Lee and Bart Eberwein, Oregon’s new Honorary Consul for Canada. In addition to celebrating Bart’s appointment, the discussion will cover the wide ranging nature of the Oregon-Canada relationship. Participants can expect to learn the latest on trade issues and shared interests in environmental and climate action, as well as hear the Canadian perspective on common challenges related to COVID-19 and the social unrest witnessed across North America in 2020.

Mr. Brandon Lee was appointed as Consul General of Canada in Seattle in 2017, with accreditation for Washington State, Oregon, Idaho and Alaska. Lee joined the Canadian Department of Foreign Affairs and International Trade in 2004. He has a background leading management and innovation, and he has held several executive and management positions within the department. From 2007 to 2011, he oversaw reform activities to strengthen Canada’s international presence and became the Department’s first Director of Innovation. From 2012 to 2014, Mr. Lee held senior positions at the World Trade Organization and the International Committee of the Red Cross (both in Geneva), spearheading major organizational and international reform initiatives.  From 2015-2017, Mr. Lee was Consul General of Canada in San Francisco, with accreditation for Northern California and Hawaii. Previously, Mr. Lee worked in the private sector as a pioneer in online banking in North America and with large-scale telecommunications and IT management consulting firms.

Bart Eberwein has lived in Oregon for over 40 years. He has an MBA and an undergraduate degree (Journalism) from the University of Oregon. It was probably in Eugene, a town that straddles the Willamette River still flowing cold from the nearby Cascade Mountains, that he developed a love of outdoor pursuits, and a love for reading when it rained hard. Bart has worked for Hoffman Construction, a $2+ billion company headquartered in Portland for 30 years. He is an Executive Vice President, developing new business strategies and helping to manage key organizational relationships including community, government, education and corporate sectors. In 2019 he was honored with the “Industry Icon” award for contributions to diversity, equity and inclusion. His community involvement includes board stints at Literary Arts; Cycle Oregon; Architecture Foundation of Oregon; and the Oregon Symphony. Oregon Governors have appointed him to the Oregon Land Conservation Development Commission (2010 – 2018) and the Oregon Arts Commission (2006 – 2010). President Bush appointed him to the United States National Forest Foundation, where he served for 12 years and chaired the marketing committee.

Canadian-U.S. Relations Through an Oregon Lens