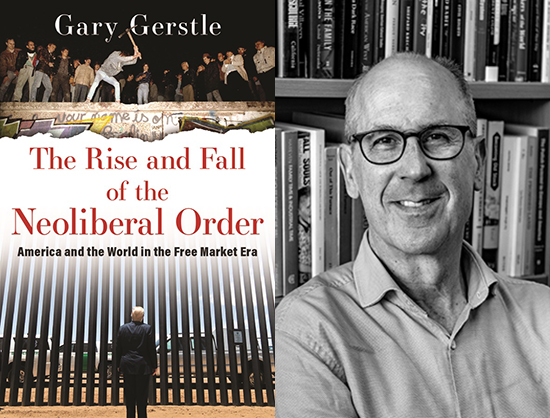 The shift toward neoliberalism that began in the United States and Great Britain in the late 1970s fundamentally changed the world. Today, the word "neoliberal" is often used to condemn a broad swath of policies, from prizing free market principles over people to advancing privatization programs in developing nations around the world, to contributing to massive growth in income inequality. Whether you come in on the side of the for or against on these criticisms, too often discussion fails to clarify just what neoliberalism is and why its worldview has had such a persuasive hold on both the right and the left for three decades.

What role did the fusion of ideas like deregulation with personal freedoms, open borders with cosmopolitanism, and globalization with the promise of increased prosperity for all play in creating an American conception of a neoliberal order? How was its rise perhaps facilitated by the collapse of the Soviet Union and its communist allies? How did events and phenomena like the fraught reconstruction of Iraq, the Great Recession of the Bush years, and the current landscape of political and cultural polarization contribute to the decline of the neoliberal order's currency? What is next for this influential ideology that dominated American politics for nearly a half century?

Join us for a rich discussion with eminent historian Gary Gerstle as he delves into these and other complex issues and questions in his new book, The Rise and Fall of the Neoliberal Order: America and the World in the Free Market Era.

Gary Gerstle is Paul Mellon Professor Emeritus at the University of Cambridge. He is the author and editor of more than ten books, including two prizewinners, American Crucible (2017) and Liberty and Coercion (2015). He is a regular contributor to The Guardian and has also written for the Atlantic Monthly, the New Statesman, Dissent, The Nation, Die Zeit, Aeon, and Zocalo, among others. He frequently appears on BBC Radio 4, BBC World Service, ITV 4, Talking Politics, and NPR.

Gary Gerstle | The Rise and Fall of the Neoliberal Order: America & the World in the Free Market Era