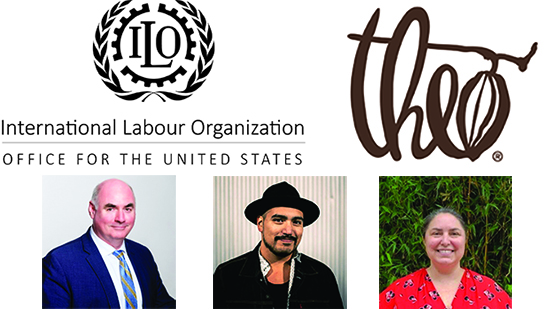 Kevin Cassidy, Director of the International Labour Organization (ILO) joins us for an exploration of this UN agency’s work —their history and mission; their role in combatting child labor (particularly in the chocolate sector); and how they engage with global and domestic partners in both the public and private sector to fight exploitative practices. Following his presentation, Aaron Lindstrom, Chocolate Education and Outreach Manager and Monique Heineman, Brand Manager Social Impact offer a look inside Theo’s approach to conflict-free business practice —from farm to chocolate bar—and how they have modeled ethical sourcing,  transparency, and socially responsible choices.

Kevin Cassidy, with nearly four decades of international development experience, is currently the Director and Representative to the Bretton Woods, Multilateral Organizations for the International Labour Organization (ILO) Office for the United States. Prior to this appointment, Mr. Cassidy served as the Senior Communications and Economic and Social Affairs Officer in the ILO Office for the United Nations. This work focused on introducing policy language on key development issues to Member States into the resolutions and outcomes documents of the UN General Assembly’s Third Committee and the Commissions of the Economic and Social Council (ECOSOC). Mr. Cassidy was also the ILO’s Chief Technical Adviser for the ILO’s Global Campaign on Promoting Fundamental Rights at Work. During that time he developed numerous communication initiatives in over 40 countries such as interactive radio and television programs as well as training journalists on communicating locally on decent work, child labor, forced labor, discrimination, and the freedom of association.

Aaron Lindstrom has been working in the chocolate industry for over a decade. In those 10+ years, he has trained as a chocolatier, studied on cocoa farms in South America, hosted over a hundred chocolate pairings and tastings, and given lectures on sustainable farming to schools ranging from Stanford University to local elementary schools. Aaron is currently the Chocolate Education and Outreach Manager for Theo Chocolate. During his tenure at Theo, he created their Factory Tour as well as their Virtual Chocolate Tasting program. He also has been featured in articles and interviews for Food and Wine, The Seattle Times, and The History Channel’s Modern Marvels. When he’s not covered in chocolate, Aaron can be found touring as a musician and running with his best friend, a 13 year old Doberman Lab.

Monique Heineman is a Brand Manager at Theo Chocolate, responsible for Marketing, Communications and Impact. She joined the team in 2019 and led the development of Theo’s first Impact Report. She has 13 years’ experience in consumer packaged goods brand management, including U.S. and Latin American roles. While dark chocolate was her favorite when she started at Theo, she has come to love Theo’s milk chocolate, especially the new Hazelnut Crisp 45% Milk Chocolate bar.