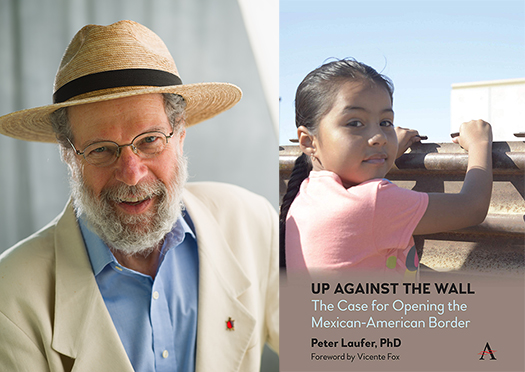 Join us for a discussion with Peter Laufer (professor of Journalism at the University of Oregon and a former global correspondent for NBC News) on the timely topic of immigration and our southern border. Laufer’s recently published Up Against the Wall: The Case for Opening the Mexican-American Border (with a forward by former Mexican president Vicente Fox, who WorldOregon presented in 2019) delves into a step-by-step blueprint of radical proposals for the U.S.-Mexican border that go far beyond traditional initiatives to ease restrictions on immigration. Placing the border in a historical perspective, Laufer shows how circumstances have deteriorated to the present crisis, and why the region and the migration through it cannot be ignored. Among his proposals, Laufer will argue that the border with Mexico should be completely open for Mexicans wishing to travel north. Laufer has interviewed dozens of authorities and men and women in the street while reporting from Mexico, along the border, and in the United States. We hope you can join us as this program is sure to provoke a lively debate over the future of Mexican immigration and global migration crises.

“This is great reporting on a complex, delicate and controversial subject. Peter Laufer knows the American side of the border and the issue, but understands the Mexican one as well. It is a case well made for a different approach to a long-standing matter of dispute between the two countries.” —Jorge G. Castañeda, former foreign minister of Mexico, professor of Latin American and Caribbean studies, New York University

Peter Laufer, PhD holds the inaugural James Wallace Chair in Journalism at the University of Oregon School of Journalism and Communication where he was awarded the Marshall Prize for teaching innovation. A former and longtime global correspondent for NBC News, Laufer reports on borders, identities and migration. He has covered the requisite wars and earthquakes, coups and elections.

Peter Laufer | Up Against the Wall: The Case for Opening the Mexican-American Border