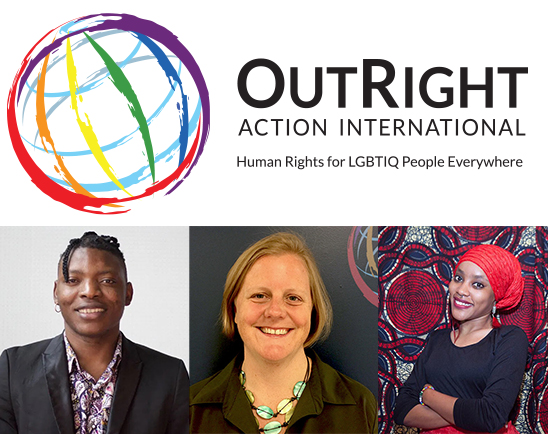 Please note time change to 10 AM PDT—this program was originally scheduled at 12 PM and has been changed to accommodate our international speaker(s).

Join us for a Pride Month program spotlighting the ongoing, important work of OutRight Action International and other leading activists sharing recent successes and challenges in the global LGBTIQ movement.

Micheal Ighodaro is a Nigerian LGBQI Activist, and senior public health and global LGBTQI rights expert, with over a decade of expertise in strategy, analytics, and program operations and management, media engagement on International LGBTQI issues. He was awarded by President Obama in 2015 as a Champion of Change. His work has appeared in the Huffington Post, Buzzfeed, New York Times, Al Jazeera America, BBC, and UN news outlets. He is currently the Program Manager at AVAC while attending the New School. He has also worked with Housing Works and Outright Action International, first as a fellow and now as co-chair of the Board of Directors. He is also a current subject of an upcoming documentary by HBO, scheduled to be released in summer 2021. He has worked domestically and internationally (in more than 20 countries) and has expertise in the translation of advocates demands into policy and health programs. Micheal has collaborated with national governments, the private sector, communities on several public health programs across the globe and worked as a team member in a multimillion dollar advocacy project. Micheal is a co-chair of the board of Outright Action International. Micheal is originally from Nigeria and immigrated to the U.S. in October of 2012.

Katie Hultquist is the Director of Leadership Giving for OutRight Action International, a U.S.-based non-profit advancing human rights and equality for LGBTIQ people around the world. She has more than 20 years of experience in nonprofit management, fundraising, and social justice activism for local, national, and international organizations. Previously, Katie served as the Northwest Regional Director at NPH USA, where she raised more than $11 million to support vulnerable children in Latin America and the Caribbean, and helped launch a training institute for young leaders from Central America. Katie was also the Executive Director of Passages Northwest, a Seattle nonprofit dedicated to building courage and leadership in girls and women through the outdoors and the arts. Katie has worked in leadership roles with the Religious Coalition for Reproductive Choice, Ashoka/Youth Venture, and Harvey Gantt’s 1996 U.S. Senate Campaign in North Carolina. She holds an Executive Masters degree in Nonprofit Leadership from Seattle University and a B.A. in International Studies from the University of North Carolina. Katie is originally from San Francisco, and now lives with her wife and three children in Seattle, where she enjoys supporting women’s professional soccer and basketball.

Shamim Salim is a Queer Muslim disabled feminist and a human rights activist. Shamim lives her life as a political statement and as a way to create more opportunities for younger LGBTIQ folks and womxn to claim their spaces, speak up, and further the movement. For the last four years, her work with the Church World Service (CWS) has centered on faith advocacy for LGBTIQ persons by changing hearts and minds of faith leaders in Kenya to take up actions towards the inclusion of LGBTI persons. Shamim is also a co-founder of Henna Space which is an organizing for Queer Muslim Womxn and Queer Disabled folks working on the intersectionality of religion, sexuality, and disability. Shamim is also a member of the African Queer Youth Initiative, a network of youth activists and organizations mobilizing, supporting and amplifying the voice of LGBTIQ activists, building visibility and strategic networks in support of LGBTIQ youth in Africa. Shamim is a board member of UHAI EASHRI, an indigenous activist fund which provides flexible, accessible resources to support civil society activism around issues of sexuality, health, and human rights in the East African region.