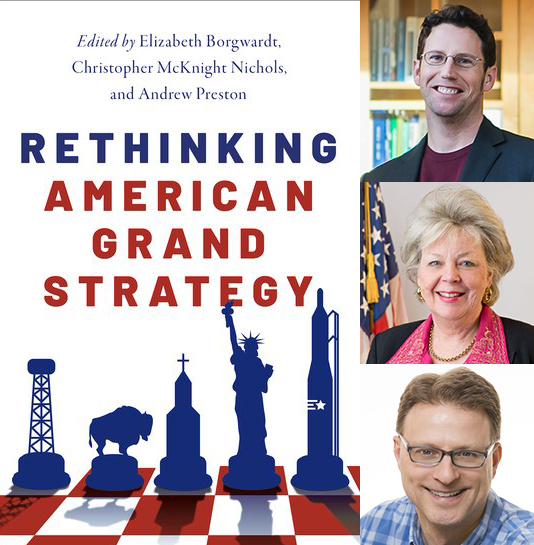 Rethinking American Grand Strategy recasts both historical and modern dimensions of U.S. grand strategy by broadening the factors, events, and figures that could be considered political, and therefore strategic. Join us for a 30-minute lecture with one of the volume’s co-editors, Christopher McKnight Nichols, laying out some of the broad themes, major events, and transformations in U.S. grand strategy, including an explanation of how an ensemble of leading scholars approached the history of the United States’ place in the world from the framework of rethinking.

Following the book talk, WorldOregon President Derrick Olsen will facilitate a discussion between Ambassador Mary Carlin Yates and Director of the Oregon State University Center for the Humanities Christopher McKnight Nichols about on how the historical insights provided in Rethinking American Grand Strategy could aid in re-conceptualizing domestic needs and foreign policy in a post-COVID-19 world.

Copies of Rethinking American Grand Strategy are available for sale through the OHS Museum Store. Order your copy by emailing [email protected].

Rethinking American Grand Strategy assembles a roster of leading historians to examine America's place in the world. Its innovative chapters re-examine familiar figures, such as John Quincy Adams, George Kennan, and Henry Kissinger, while also revealing the forgotten episodes and hidden voices of American grand strategy. They expand the scope of diplomatic and military history by placing the grand strategies of public health, race, gender, humanitarianism, and the law alongside military and diplomatic affairs to reveal hidden strategists as well as strategies.

Christopher McKnight Nichols teaches history at Oregon State University. Nichols is Director of the Oregon State University Center for the Humanities. He founded OSU’s Citizenship and Crisis Initiative. Nichols specializes in the history of the United States and its relationship to the rest of the world, particularly in the areas of isolationism, internationalism, and globalization. In 2016 Nichols was awarded an Andrew Carnegie Fellowship. In 2017 Nichols became an Organization of American Historians (OAH) Distinguished Lecturer. Nichols’ 2018 TED Talk is entitled “The Untold Story of American Isolationism” (aka “Why History Matters Today”). A past OSU Professor of the Year, Nichols was recently named 2021 Sandy and Elva Sanders Eminent Professor in the OSU Honors College. Dr. Nichols is the author, co-author, or editor of six books, including Promise and Peril: America at the Dawn of a Global Age, which explains the origins of modern American isolationism and the dynamic interplay of international engagement, isolationist thought, and domestic reform from the 1890s through the 1940s.

Derrick Olsen is President of WorldOregon. Prior to joining the organization in 2016, Derrick was the Vice President of Regional Strategy at the regional economic development nonprofit Greater Portland Inc (GPI) for almost four years. Previously, Derrick managed international trade and investment issues for over four years with Business Oregon. Derrick also has over 13 years of experience managing political and economic issues as a Foreign Service Officer for the U.S. Department of State in Latin America, Asia, and Washington, DC, with four overseas tours including as Chief of the U.S. Embassy’s Political Section in Tegucigalpa, Honduras.

Ambassador Mary Carlin Yates is retired from the Department of State after a 32-year diplomatic career primarily in three geographic areas: Asia, Africa and Europe. She was special assistant to President Obama on the National Security Council (2009-11), first for Strategic Planning and then African Affairs. Her diplomatic assignments included positions at U.S. military commands: political advisor at the European Command and deputy commander for the new U.S. Africa Command. She is currently a board director at the Atlantic Council in Washington DC; and a member of the Board of Trustees of WorldOregon.