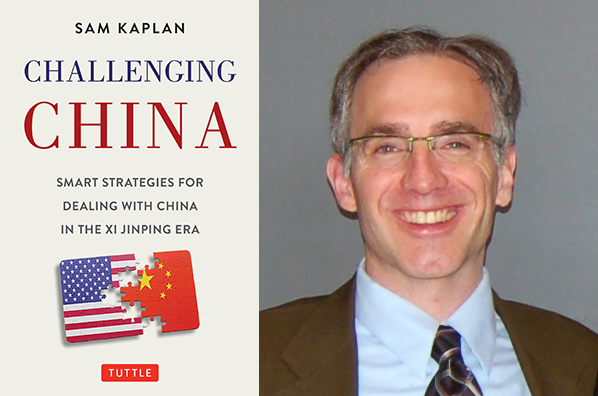 How did China become more authoritarian and expansionist in recent years and what strategies do the U.S. and its allies need to adopt to address this new challenging China? Join us for a discussion with Sam Kaplan, author of the recently released, Challenging China: Smart Strategies for Dealing with China in the Xi Jinping Era, as he explores how China has become more oppressive, more aggressive on the world stage, and continued to grow its economy. With broad perspective and wit, Sam discusses these trends and provides strategies for how the United States and world can deal with these and other key challenges—from the great escalator incident of 2015, a secret speech given by Xi Jinping to China's stunning economic success to the curious case of what a dwarf Japanese maple tree at his old house has to do with any of this. While delving into serious issues in the U.S.-China dynamic, Kaplan, in his inimitably engaging manner,  may also be one of the few China experts writing who also manages to weave Dolly Parton, K-pop boy-band BTS, LeBron James, and Bruce Springsteen into the complexity of contemporary China's rise.

Sam Kaplan has worked with and in China and written about it for thirty plus years in a variety of business, policy and education roles. Currently he is director of the Center of Excellence for Global Trade and Supply Chain Management. As president of the Trade Development Alliance (TDA) of Greater Seattle, Sam organized numerous trade and business missions to China and hosted countless delegations, business people, government officials and others from China. Sam was a key member of the host committees for the visits of both President Hu Jintao and Xi Jinping to Seattle. This provided him an up-close view into the changing dynamics of China and U.S. relations. He also served as the President of the Boao Forum, Seattle LLC, managing the organization of a high-level clean technology conference in 2014 featuring government, business, and academic leaders from throughout Asia and North America such as Zhang Guobao, Bill Gates, and Henry Paulson. Sam acted as the Interim Executive Director for the Washington State China Relations Council concurrent to his role as TDA President. While working for U.S. Representative John Miller, Sam handled the Congressman's foreign affairs and international trade issues, including working on trade and human rights issues regarding China. Sam also steered the private sector effort for Governor Jay Inslee's trade mission to China. Sam publishes a weekly e-newsletter, International Need to Know, which is read each week by 400 to 1000 leaders, including CEOs, elected officials and nonprofit directors, featuring articles on China and other issues.

PURCHASE A COPY OF CHALLENGING CHINA from Broadway Books

Special offer: Save 15% on your purchase using coupon code "WOKaplan" on checkout