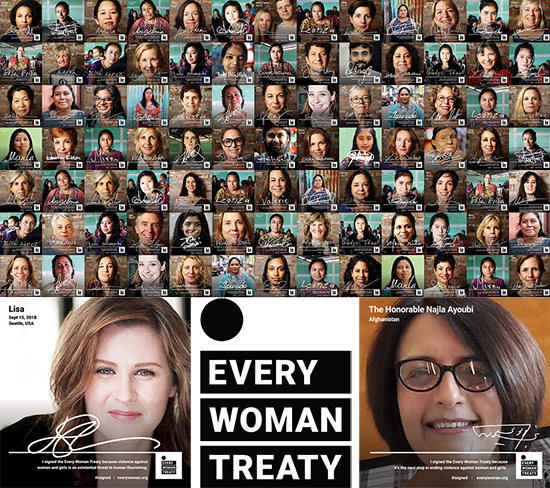 Every Woman Treaty is a campaign for a global treaty to end violence against women and girls. The global coalition includes more than 1,700 women’s rights advocates, lawyers, scholars, and organizations in 128 countries working for a safer world for women and girls worldwide.

Join us for a discussion with Lisa Shannon (CEO and cofounder) and Judge Najla Ayoubi (Chief of Coalition & Global Programs) on the work that EWT is engaged with over a wide range of vital advocacy areas —from women’s empowerment and poverty elimination, to legal status and the rights of widows, to indigenous rights and onward — in an effort to close the gap in the cultural and legal framework that will lead to better protections for women worldwide.

Read The Safer Sooner Report released last year by the Every Woman Institute—reflecting more than six years of research and dialogue with 1,700 leaders and 843 organizations in 128 countries.

Lisa Shannon,  Cofounder, CEO of Every Woman Treaty, is a women’s rights activist and scholar who has worked in women’s rights since 1991. Her first job out of college was in domestic violence shelters in her hometown of Portland, Oregon. She has conducted field research on gender in India, Russia, Somalia, Iraq, Guatemala, Kenya, and Congo. She is known for initiating campaigns in the international women’s movement, including founding Run for Congo Women and cofounding the first sexual violence crisis center in Mogadishu, Somalia. She is the author of the award-winning A Thousand Sisters (Seal Press, 2010) and Mama Koko and the Hundred Gunmen (Public Affairs, 2015). Lisa was a Fellow of the Carr Center for Human Rights (2013–2014), and a Gleitsman Fellow with the Center for Public Leadership (2012–2013) at the Harvard Kennedy School. She holds an honorary Doctorate in Humane Letters from Georgetown University (2013).

Judge Najla Ayoubi, Chief of Coalition & Global Programs at Every Woman Treaty, is a lawyer and former judge and has extensive experience in judiciary, elections, human rights and women’s empowerment. She served as a Legal Advisor for the State Ministry of Parliamentary Affairs of Afghanistan, Commissioner at the Independent Election Commission of Afghanistan and Commissioner of Joint Electoral Management Body. Judge Ayoubi played a great role in Constitution making process of Afghanistan. She was the Senior State Attorney at the Attorney General Office of Afghanistan, State Attorney of the Parwan province, and Judge at the Parwan Provincial Court. She has worked with The Asia Foundation Afghanistan in different capacities, and has served as a Board Member of Open Society Afghanistan as well as the Country Director of Open Society Afghanistan, among her many other board and advisory appointments.  Ms. Ayoubi has an MA in Law and Politics from State University of Tajikistan and an MA in Post War Recovery and Development Studies from York University of United Kingdom. Judge Ayoubi was appointed as the 2015 Women Peacemaker at the Kroc Institute for Peace and Justice at the University of San Diego United State and was also a Visiting Fellow at the University of Chicago Institute of Politics.