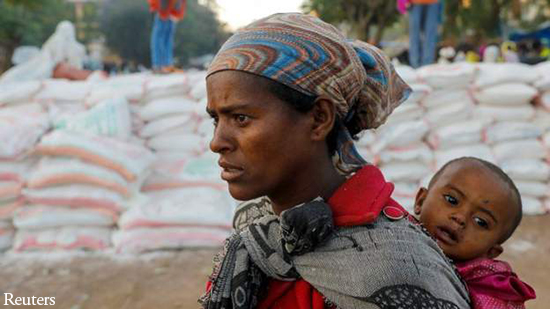 War broke out in November 2020 between Ethiopia’s federal troops and forces loyal to the Tigray People’s Liberation Front (TPLF), which controls the regional state of Tigray. Thousands have died, millions have fled their homes and the conflict has spilled into the neighboring regions of Amhara and Afar. Throughout the conflict, reports of unspeakable atrocities have been a near-daily occurrence.

Currently the UN estimates that up to seven million people in the regional states of Tigray, Amhara, and Afar need help, including five million in Tigray where some 400,000 people are said to be living in famine-like conditions. And now senior UN officials have found themselves expelled from the country. How should the international community confront the atrocities and this devastating humanitarian crisis? Can Ethiopia’s leadership walk back from the precipice before the conflict becomes another Darfur? Should the U.S. be involved —and are sanctions merely enough?

Join us for a discussion with Ambassador Vicki Huddleston, Tigrayan human rights activist Millete Birhanemaskel, and Cameron Hudson of the Atlantic Council’s Africa Center for an in-depth look at this harrowing global crisis and where it may be headed.

Millete Birhanemaskel moved to the United States from Ethiopia in 1982. She is the founder of the Ethiopian Community Center based in Denver and has spent more than two decades fighting for social justice as a journalist and business owner of Denver’s only activist and social justice café. She traveled to Sudan to interview Tigrayan refugees and has met with dozens of senators and representatives to advocate for an end to the war. She has lost nine family members in the Tigray Genocide.

Ambassador Vicki J. Huddleston is a retired career Senior Foreign Service Officer whose last assignment was as U.S. Deputy Assistant Secretary of Defense for African Affairs in the Office of the Secretary of Defense. Before that she was Chargé d'Affaires ad interim to Ethiopia, United States Ambassador to Mali, Principal Officer of the U.S. Interests Section in Havana, Deputy Assistant Secretary of State for African Affairs, and U.S. Ambassador to Madagascar.

Cameron Hudson is a nonresident senior fellow with the Atlantic Council’s Africa Center. Previously, he served as the senior strategic advisor at the United States Holocaust Memorial Museum and as the executive director of the Museum’s Simon-Skjodt Center for the Prevention of Genocide. Prior to that, Hudson served as the chief of staff to successive Presidential Special Envoys for Sudan during the period of South Sudan’s separation from Sudan.