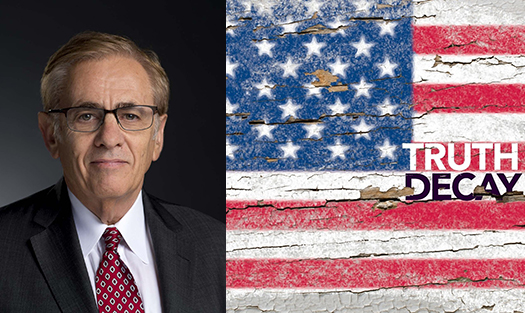 Join us for an eye-opening discussion with Michael D. Rich, President and Chief Executive Officer, RAND Corporation, on the causes and consequences of "Truth Decay”—the diminishing role of facts and analysis in American public life.

Over the past two decades, national political and civil discourse in the U.S. has been characterized by "Truth Decay" — an increasing disagreement about facts and analytical interpretations of facts and data; a blurring of the line between opinion and fact; and perhaps most alarmingly, a lowered trust in expertise, institutions, and once respected sources of factual information.

These trends have many causes, from cognitive bias to cultural shifts in how we access information, influenced by social media and the 24-hour news cycle; conflicting demands on the education system to ever-deepening polarization, both political and demographic. But perhaps the most damaging consequences of truth decay has resulted in the erosion of civil discourse, and a disengagement of individuals from political and civic institutions, and uncertainty over national policy. Nowhere is this more evident than with the enormous challenges related to the COVID-19 pandemic — from information and engagement around public health, to leadership (regionally, nationally, and globally), and the media's role in that. Is Truth Decay a recent phenomenon or is there historical, cultural precedent for its rise into mainstream consciousness? Could COVID-19 be the tipping-point for evidence-based reporting and policymaking? What can be done to combat Truth Decay in this moment?

Michael D. Rich is president and chief executive officer of the RAND Corporation, a nonprofit, nonpartisan research organization that helps improve policy and decision-making through research and analysis. For more than 40 years, Rich has helped RAND become a leading source of expertise, analysis, and evidence-based ideas in an increasingly complex and polarized policymaking environment. Rich began his career at RAND as a summer intern in 1975, joining the organization full-time the following year as a researcher focused on U.S. national security issues and was instrumental in the creation of the RAND National Defense Research Institute, a federally funded research and development center that provides research and analysis to the Office of the Secretary of Defense, the Joint Staff, the Unified Commands, the Navy, the Marine Corps, the defense agencies, and the Intelligence Community. He also helped lead RAND's diversification and expansion into international markets—including the establishment of RAND Europe, the RAND Qatar Policy Institute, and RAND Australia. Since becoming president and CEO in 2011, Rich has focused on extending the impact of RAND's work—challenging the organization to broaden its legacy of innovation and helping decision-makers stay ahead of the curve on the issues that matter most.

Presented in conjunction with CxC: Amplified - Putting the World Back Together (An ideas summit presented by World Affairs Councils nationwide)

Free for WorldOregon and World Affairs Councils of America members.

Program limited to 100 participants (via Zoom). A link to the Zoom webinar* and instructions for participating will be sent to you after you RSVP —as this is an autoresponse message, there's always a chance it has gone to spam/junk boxes, so please check there.

* If you have questions about Zoom and its usage and security please click here.

Sorry, this event is sold out.