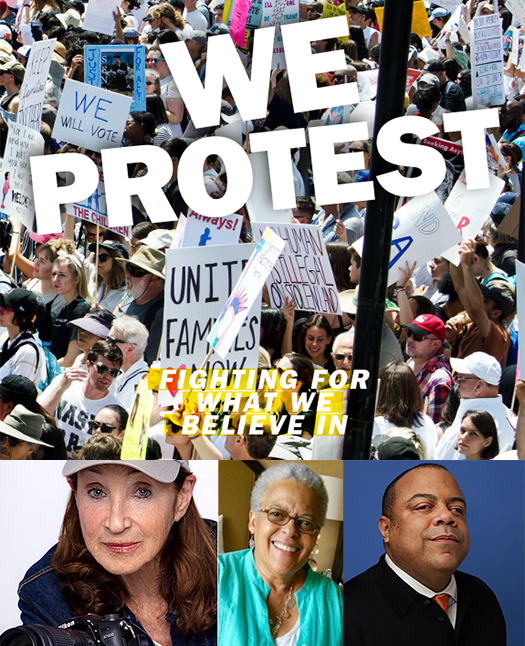 In the last few years we have seen a wave of activism washed across our nation and inspire unprecedented protest and civic engagement. People came together in record-breaking numbers, outspoken and persistent. With the winds of resistance at their backs, people linked arms and set out to defend our freedoms and each other.

In her newly published book, We Protest: Fighting For What We Believe In photojournalist Tish Lampert, who has been documenting protests for over 20 years, captures the spirit of the heroes and ordinary citizens on their activist journey to defend their American values during the most conflicted era in our recent history. Lampert boldly charts the chronology of social-change movements that have dominated the headlines over the past several years: the fight for women's rights and gender equality, immigration rights, civil liberties, gun violence, and the environment. Lampert takes us to the front lines of activism, where she has documented each protest and their respective leaders, as well as the legions of ordinary Americans standing together to protect the values of our great nation.

In recent months the eyes of the nation and the world have been on Portland as citizens have been demonstrating for over 70 days to protest systemic racism, police brutality, and support larger cause of Black Lives Matter. How do we put this moment in perspective and understand Portland’s story in the larger arc of activism?

Join us for a rich discussion on protest, present and past, with photojournalist Tish Lampert, Adrienne Belafonte Biesemeyer, activist and Executive Director of the Anir Foundation, and Portland’s Eric K. Ward, Executive Director of Western States Center. Also featuring a special video introduction from Pulitzer Prize-winning New York Times journalist and best-selling author David K. Shipler, reciting the foreword he wrote for WE PROTEST,  illustrated with images from Lampert’s photographs from the book.

Cosponsored with the World Affairs Councils of America.

ORDER A COPY OF "WE PROTEST" SIGNED BY Tish Lampert

Photojournalist and writer Tish Lampert, based in Los Angeles, focuses her lens on human-rights issues. She freelances for the United Nations, the Conflict Awareness Project, United States Veterans' Artists Alliance, and Border Angels. She has won several awards for her work in the Democratic Republic of Congo for the Congo lowland gorilla. Lampert is a recipient of two Nathan Cummings Foundation Family Grants in 2013 and 2019. She has chronicled protest movements that have been catalysts for reform in America for 20 years. She covered the 1992 riots in Los Angeles; the Cesar Chavez movement for migrant worker’s rights; the Navajo Nation in Tuba City and Window Rock, among others.  Her “in the field” investigations include assignments for:  Conflict Awareness Project, Voices of African Mothers, Gente Unide, and Border Angels, to name a few.  She has won awards for her work in Sub-Sahara Africa and has exhibited in the United Nations, Photo LA and elsewhere. For five years she served as media director and photographer for Voices of African Mothers at the United Nations. She is the host of the podcast America Speaks with Tish Lampert.

Adrienne Belafonte Biesemeyer is the eldest daughter of famed actor And humanitarian, Harry Belafonte.  For 25 years she had a private counseling practice focusing on children and their families. From 2009-2012 she was a Learning Specialist at the West Virginia School of Osteopathic Medicine (WVSOM) in Lewisburg, WV. From 2009-20019 She designed and directed the WVSOM Center for International Medicine and Cultural Concerns which focused on creating opportunities for medical students to learn about and experience medical training in underserved countries around the world. Adrienne holds a Bachelor of Arts Degree in Art from West Virginia State University and a Master of Arts Degree in Community Counseling from the West Virginia Graduate College/Marshall University. Adrienne retired from WVSOM in May 2019 and took on volunteering full time as Executive Director of the Anir Foundation which she co-founded with her daughter Rachel Blue in 1997. The Anir Foundation creates volunteer opportunities for North Americans to focus on social change in underserved Southern and East African communities, with particular spotlight on assistance to women, children & families in regards to housing, education, HIV/AIDS/STD prevention, other health issues, and cultural heritage preservation.

Eric K. Ward is a national expert on the relationship between hate violence and preserving democratic institutions, governance, and inclusive societies and is the Executive Director of Western States Center. Originally from Los Angeles, Eric began his civil rights work when the white nationalist movement was engaged in violent paramilitary activity that sought to undermine democratic governance in the Pacific Northwest. He is also the recipient of the Peabody-Facebook Futures Media Award, Arab American Association of New York Community Impact Award, and Martin Luther King Jr. Leadership Award.

We Protest: Fighting For What We Believe In — Tish Lampert, Adrienne Belafonte Biesemeyer, and Eric K. Ward