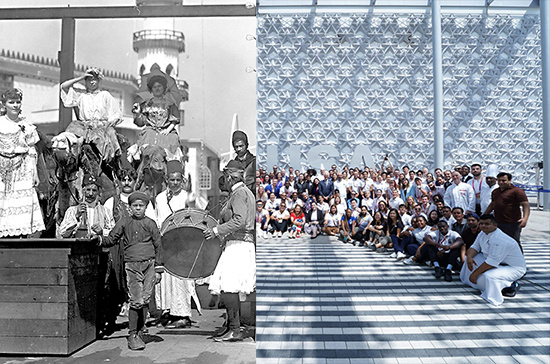 Expos, also known as World’s Fairs, are the world’s oldest and largest mega events, held every three to five years in host cities around the world since their inception in 1851 in London. Similar to the Olympics, which are world festivals of sports, Expos are festivals of culture, technology, innovation, design, and human achievement. Past Expos have seen a multitude of countries showcase innovations such as the mobile phone, the X-Ray Machine, and the ice cream cone.

Yet the history of presenting global cultures to U.S. audiences has not been without controversy. World’s Fairs have had a complex history that often relegated cultures and peoples to spectacle and stereotype, “other-izing” difference with “living” exhibits of cultures and people, which framed a skewed and shameful narrative on the history and future of “civilization” and progress.

Join WorldOregon and a panel of acclaimed historians and diplomacy experts for a rich conversation on Expos—past, present, and future—and their potential as platforms of soft power platforms with international audiences. A marvelous opportunity to explore broad questions around everyday diplomacy, race, culture, representation, justice, and inclusion and to learn through the lessons of history and contemporary storytelling how we think about and connect to this ever more interconnected world we share.

This program is made possible, in part, through the support of The National Endowment for the Humanities, the U.S. Department of State’s Bureau for Educational and Cultural Affairs, and Global Ties U.S.

World’s Fairs & Expos—Refocusing the Lens, Past and Present