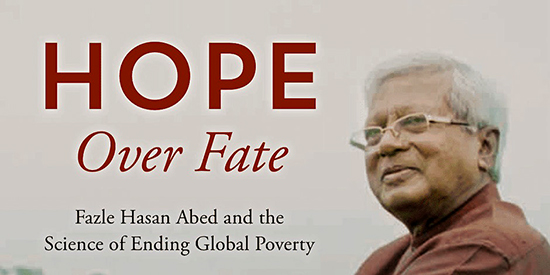 “One of the unsung heroes of modern times.”

Fazle Hasan Abed was a mild-mannered accountant who may be the most influential man most people have never even heard of. As the founder of the Bangladesh Rehabilitation Assistance Committee (BRAC), his work had a profound impact on the lives of millions. A former finance executive with almost no experience in relief aid, he founded BRAC in 1972, aiming to help a few thousand war refugees. A half century later, BRAC is by many measures the largest nongovernmental organization in the world—and by many accounts, the most effective anti-poverty program ever.

BRAC seems to stand apart from countless failed development ventures. Its scale is massive, with 100,000 employees reaching more than 100 million people in Asia and Africa. In Bangladesh, where it began, Abed’s work gave rise to “some of the biggest gains in the basic condition of people’s lives ever seen anywhere,” according to The Economist. His methods changed the way global policymakers think about poverty. By the time of his death at eighty-three in December 2019, he was revered in international development circles. Yet among the wider public he remained largely unknown. His story has never been told—until now.

Join us, as author Scott MacMillan brings to life the inspiring, change-making life of Abed with Hope Over Fate and offers a vision for reducing poverty and inequality both here and abroad.

Scott MacMillan is the director of learning and innovation at BRAC USA, an affiliate organization of BRAC, where he has worked since 2011. A former journalist, he served as the speechwriter of Sir Fazle Hasan Abed, the founder of BRAC, prior to Abed’s death in 2019.

NOTE: This is an in-person event. A book-signing with the author follows the program.