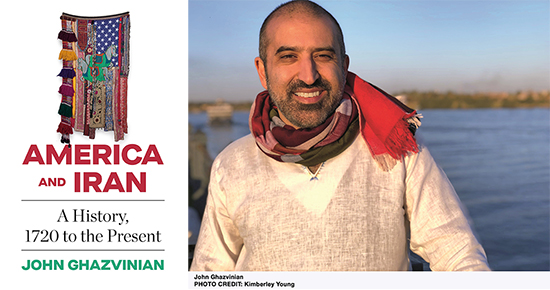 Join us for a rich and fascinating discussion as historian John Ghazvinian traces the complex story of the relations between the U.S. and Iran back to the Persian Empire of the eighteenth century—greatly admired by Thomas Jefferson and John Quincy Adams—and to an America seen by Iranians as an ideal to emulate for their own government. Where, how, and when did things take a wrong turn in the relationship? Why did two countries that once had such heartfelt admiration for each other became such committed enemies? And how could the present situation have had a different outcome? Ghazvinian draws on years of archival research both in the United States and Iran—including access to Iranian government archives rarely available to Western scholars—and leads us through the four seasons of U.S.–Iran relations: the spring of mutual fascination; the summer of early interactions; the autumn of close strategic ties; and the long, dark winter of mutual distrust and suspicion.

John Ghazvinian was born in Iran and raised in London and Los Angeles. He has a doctorate in history from Oxford University and was the recipient of a "Public Scholar" fellowship from the National Endowment for the Humanities in 2016-2017, as well as a fellowship from the Carnegie Corporation's special initiative on Islam in 2009-2010. Ghazvinian's writing has appeared in Newsweek, The Sunday Times, New Statesman, Slate, and The Nation. He directs the Middle East Center at the University of Pennsylvania and lives in Philadelphia.

John Ghazvinian | America & Iran: A History, 1720 to the Present