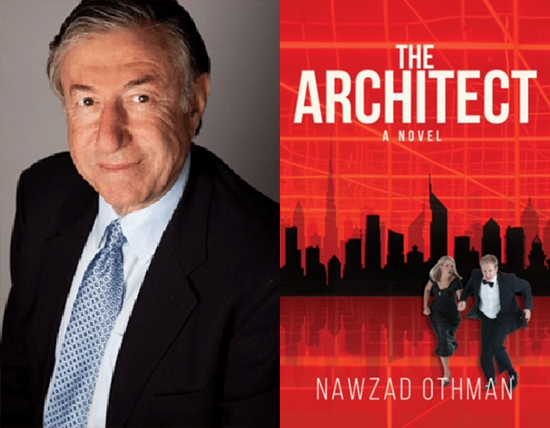 Nawzad Othman is known to many in the WorldOregon community for cofounding the renowned engineering firm Otak, his long involvement as a Trustee and former Board chair, and as a speaker on numerous occasions on topics around the Middle East, Iraq, and notably, his beloved Kurdistan. Giving further credence to the idea that Oregonians don’t retire, they just find new challenges and page-turning adventures, Othman joins us for a different kind of program all together: the release of his first novel.

After an illustrious career as an engineer, Othman has continued to work and consult with businesses working in the Middle East — which laid the groundwork for his latest project, The Architect, a novel steeped in high-tech intrigue and the intersection of A.I., cybersecurity, espionage, and a plot based around a new building in the heart of Dubai. Meet Andy Sykes, the lead architect for STR, a Los Angeles architectural firm, hired to design and supervise the construction of new zero-carbon project in  Dubai.  But on his way to the grand opening, something is not quite right. Secrets, security, and a potential plot by radical non-state actors threaten its success.

Join us for a conversation about Othman’s experiences working in Iraq, and Abu Dhabi, the United Arab Emirates as we explore the stories and experiences, real and fictional, that inspired his latest chapter.

Nawzad Othman was born in Ebril into a Kurdish family with deep connections to the history and evolution of the Kurdistan region. Nawzad emigrated to the U.S. when he was 18. Nawzad earned his Bachelor of Science in Civil Engineering from South Dakota State University; and his Master of Urban and Regional Studies from Mankato State University and gained considerable experience as a transportation engineer, bridge and airport design engineer in the Midwest and Oregon, including serving as director of Public Works and Planning for the City of Lake Oswego before striking out on his own.
Nawzad cofounded Otak, Inc., in 1981, one of Oregon’s largest and most respected architecture and engineering firms, with over 300 employees in Oregon, Washington, Arizona, Colorado, and Abu Dhabi, UAE and served as CEO of the company for 30 years. Under Nawzad’s leadership, the firm developed a reputation for excellence in smart growth planning, sustainable design and  development, and innovative transportation solutions. In 2012, Nawzad created The Othman Group to assist clients in the Pacific Northwest and the Middle East with business strategies, investment opportunities and sustainable practices. The firm’s associates work from offices in Portland, Oregon, Erbil, Iraq, and Abu Dhabi, the United Arab Emirates. His father Ahmed Uthman was the first governor of Erbil after independence and his portrait continues to hang today in the “ Saray “ of the present governor. His father was also the first Kurd to become a senator in Baghdad in 1929. This is his first novel.