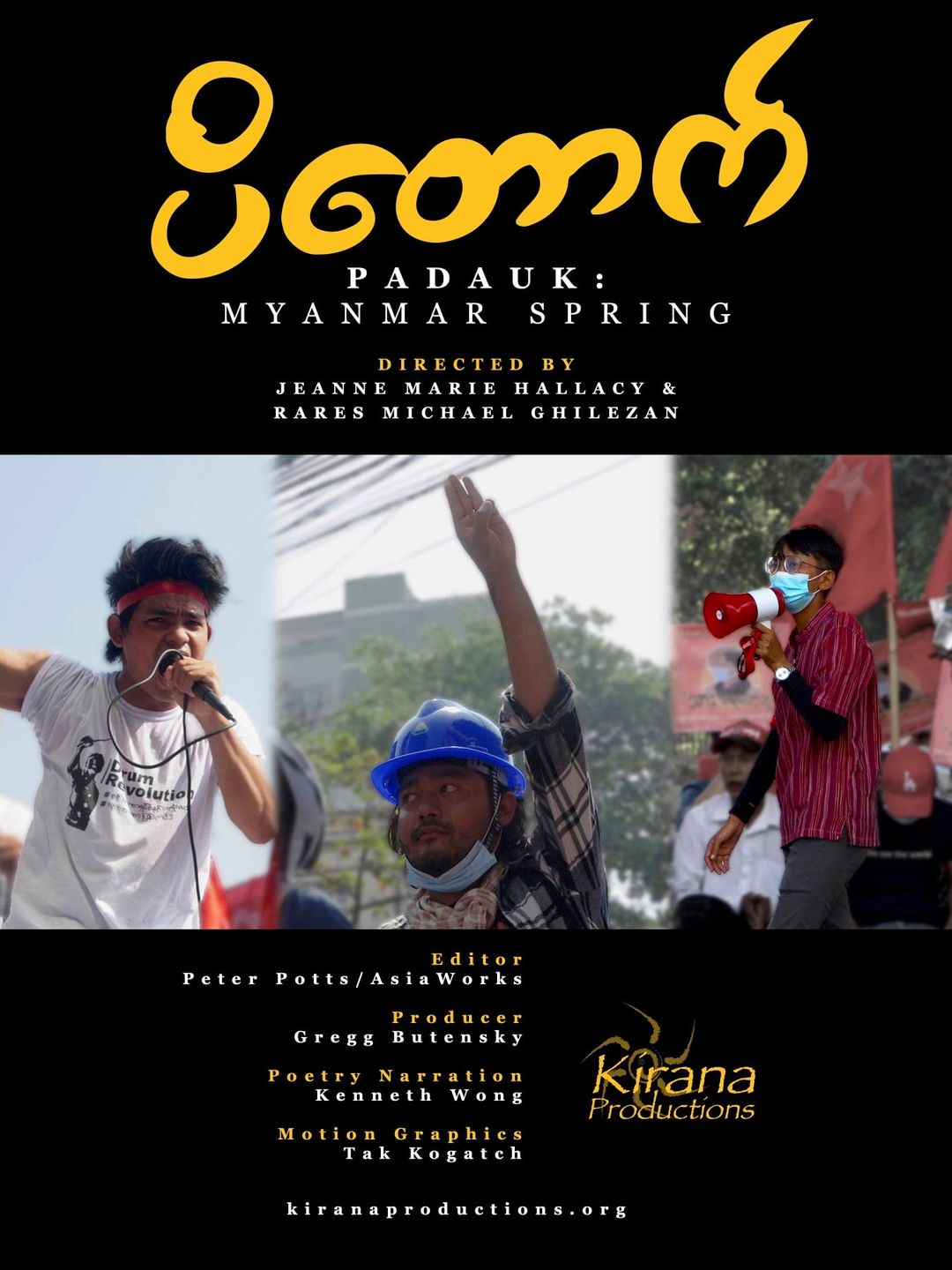 Note: A link to view the film will be sent to you following your registration for the event and be available for viewing for one week prior to the panel discussion.

Padauk: Myanmar Spring (2021, USA, 56 min) Directors Jeanne Hallacy and Rares Michael Ghilezan take the viewer to the streets of Myanmar during the heady days following the February 2021 military coup. Through Nant, a young, first-time protester, we meet three human rights activists whose lives have been turned upside down by the coup. As the protests continue, Nant comes to understand the truth of a brutal regime that has continued to wage war against its own people for decades. Against a foreboding backdrop, Nant’s political awakening regarding the plight of others in her ethnically diverse country gives hope for the future. Beautifully augmented by poetry and art, Padauk: Myanmar Spring shows the resilience and determination of the people of Myanmar, and the sacrifices they've made.

Kenneth Wong is the author of A Prayer for Burma (Santa Monica Press, 2003). His short stories and essays have appeared in Grain, AGNI, and San Francisco Chronicle magazines. He is one of the narrators for the films They Call It Myanmar: Lifting the Curtain and Padauck: Myanmar Spring. Wong is also a widely published blogger and reporter covering the computer-aided design (CAD) industry. He currently works as Digital Engineering's senior editor. Wong teaches a course on Introductory Burmese at UC Berkeley.

In Padauk: Myanmar Spring, it is through Nant, a young, first-time protester, we meet three human rights activists whose lives have been turned upside down by the coup. As the protests continue, Nant comes to understand the truth of a brutal regime that has continued to wage war against its own people for decades. Against a foreboding backdrop, Nant’s political awakening regarding the plight of others in her ethnically diverse country gives hope for the future.

Wai Wai Nu is a Burmese Rohingya activist, former political prisoner, and founder of the Women's Peace Network-Arakan and Justice for Women. Through Women's Peace Network, she focuses on peace-building in Myanmar, for all people of any gender, ethnicity and religion. Justice for Women is a network of female lawyers that provide legal aid for women in need. She is the recipient of several awards including the 2014 N-Peace Award and 2021 City of Athens Democracy Award. Wai Wai Nu was named one of the Top 100 Global Thinkers by Foreign Policy Magazine in 2015 and one of the Next Generation Leaders by Time Magazine in 2017.

Jan Jan Maran is a first-generation Kachin-American student majoring in Global Affairs at George Mason University. She previously served as Co-lead of the Burma Committee for STAND: The Student-Led Movement to End Mass Atrocities, and founded and served as President of the STAND at Mason chapter at her school. She is currently serving as the social media manager for Kachin Alliance, Burma Policy Lead for Action Corps, and is Co-Founder of the Global Movement for Myanmar Democracy

Jeanne Hallacy (introductions)
Jeanne has lived and worked in Southeast Asia for 25 years, producing and directing documentary films about human rights and social justice issues. Her films are used as educational and advocacy tools by civil society and educational institutions. Jeanne's films, Mother, Daughter, Sister, Sittwe, This Kind of Love and Into the Current were each released with an international speaking tour in the United States and Europe where the films were screened with engaged audience discussions. Jeanne is also the Director of InSIGHT Out! digital media project for youth in conflict-affected areas. She is the former Director of Programs at the Foreign Correspondents' Club of Thailand.

Rares Michael Ghilezan (introductions)
Ever since working at the UN Human Rights Council in Geneva in 2006, Rares has been passionate about social justice activism and providing a voice for the voiceless. A long-time student of Burmese politics and history, Rares jumped into the fray in May 2017 when he visited Northern Rakhine state to learn more about the Rohingya. Since then, he has been to the Rohingya refugee camps in Bangladesh twice, including as a producer on Kirana Productions' Mother, Daughter, Sister. Rares has lived in Yangon since 2018 where he lead Kirana’s film project covering the protest movement of Feb 2021. A partner at GLobal Legal Law Firm, when he's not filming he's either practicing law or surfing.